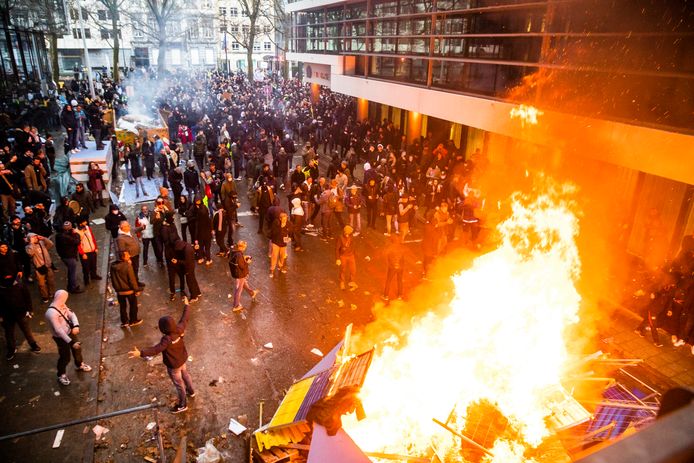 On Sunday, an estimated 35,000 people took to the streets of Brussels to protest against the stricter coronavirus measures introduced to curb the fourth wave. Riots broke out on the fringes of the demonstration, resulting in a lot of damage in the capital as well as dozens of arrests.

Tens of thousands of people gathered near the North Station to protest against the expansion of the Covid Safe Ticket and marched to Rue de la Loi between 1:00 PM and 5:00 PM.

However, the protests turned violent when a group turned off the route previously agreed by organisers and city authorities. A few thousand protesters started throwing fireworks and other projectiles at officers and also set various objects – from containers to rubbish bins – alight. In response, the police deployed water cannons and used tear gas to control the crowds.

The tweet reads: “Total chaos in Brussels near the European Institutions. The demonstration against the health pass gathering more than 35,000 people totally degenerates.”

One protester was taken to hospital for a hand injury, while three police officers became wounded in action while trying to control the riots.

They were taken to a nearby hospital but were later discharged from care following treatment. “One will be off work for four weeks and the other two for 11 days,” Van de Keere said. 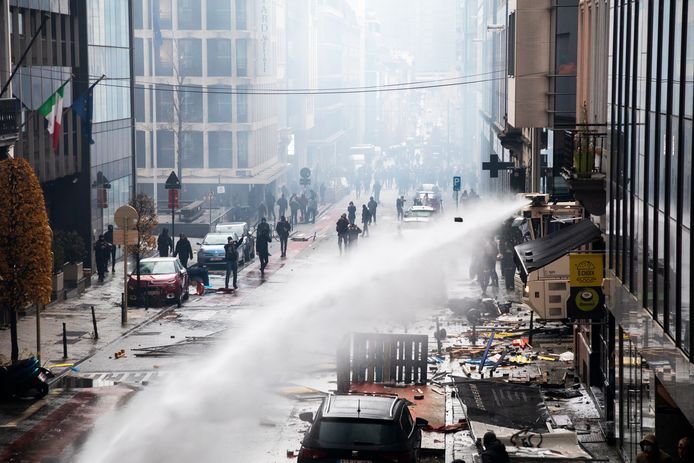 “There is a lot of damage and we are still working on the inventory,” Van de Keere said. Six police vehicles were damaged by the rioters, and one police scooter was set on fire. Videos circulated on various media outlets showing some protesters smashing police vehicles.

The tweet reads: “The demonstration against the Covid measures had 35 000 demonstrators. I strongly condemn the agitators, I gave the order to proceed to arrests and to analyse videos. Thanks to the police and the various public services for their professionalism.”

Meanwhile, the demonstration’s organisers have spoken out against the riots which followed what was meant to be a peaceful protest.

“Together for freedom, we wanted to form a big family to defend democracy together. We are proud to have united so many people. However, we do not support the violence that took place today and we distance ourselves from it,” Ezra, a spokesperson for the organisers, told Belga News Agency. Other affiliated groups included Hands for Freedom, Vecht Voor Vrijheid, Teachers for Freedom and Belgians for Freedom.