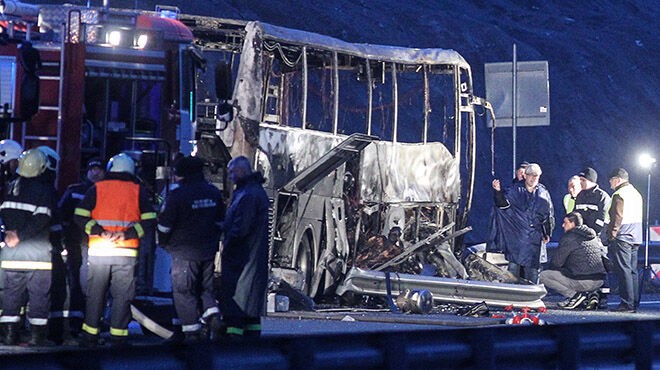 Officials work at the site of the bus accident. Credit: Belga

One Belgian man was among the dozens of people injured in a deadly bus accident that took place near Bulgaria’s capital Sofia on Monday night.

So far, a total of at least 45 fatalities have been announced, including 12 children. The surviving seven passengers were taken to hospital with non-life-threatening injuries, such as serious burns. Among them was a Belgian national, according to Belgium’s Foreign Affairs ministry.

“We can confirm a man with Belgian nationality was injured in the bus accident,” spokesperson Wouter Poels told The Brussels Times, adding that this news was announced by the North Macedonian Embassy in Sofia.

“He has been hospitalised and is now receiving care.” No further details can be given about his condition or identity, mainly for privacy reasons.

The bus, which was returning to North Macedonia’s capital Skopje after a tourist trip to Istanbul, caught fire after crashing into the guard rail on the Strouma motorway near Sofia around 2:00 AM on Tuesday. Initial reports of the incident came from the Bulgarian news agency BTA, which also confirmed that a Belgian was on board.

As both drivers reportedly died instantly, no one could open the doors of the bus, which in part led to the massive death toll. The seven who survived, including a 16-year-old girl, had to climb out a window to escape the blaze.

The scene of the accident is being examined as part of an investigation into the incident. According to a local mayor, the location is known for other deadly crashes and alarms bells had been rung about that particular part of the motorway being in an unsafe condition.

The identity of the victims will be established by DNA tests.

Both Bulgaria and North Macedonia are considering declaring a national day of mourning over the tragic accident and both governments expressed condolences to the friends and families of those who died.

The tragedy comes on top of a fire in a residential care home in eastern Bulgaria on Monday evening which killed nine of the 58 residents, according to reports from Reuters.