The Moroccan 'celebration' gone too far in multicultural realm 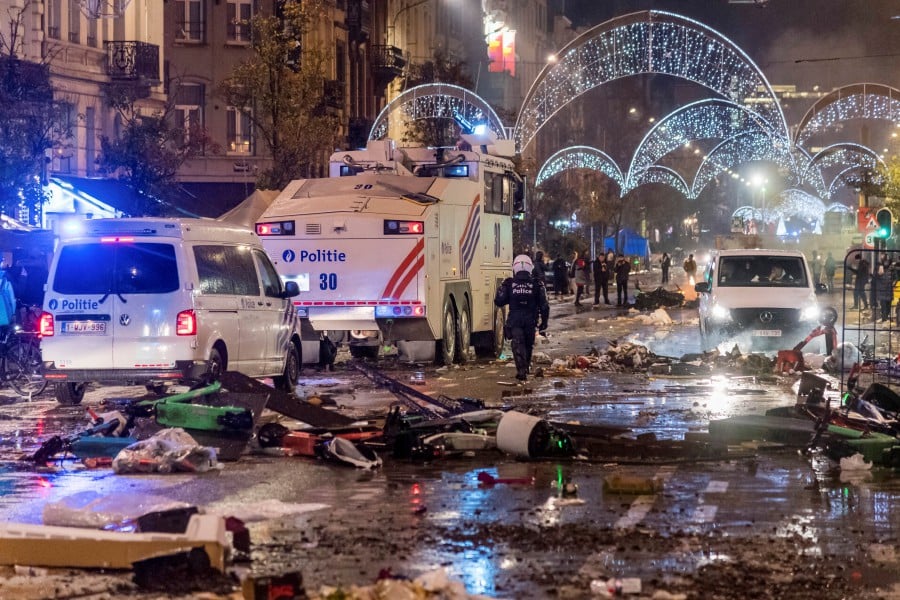 The Moroccan ‘celebration’ gone too far in multicultural realm

At the World Cup in Qatar, Morocco surprisingly won 2-0 against Belgium. The Lions of the Atlas defeated the much higher-ranked Red Devils. In all the cities of Morocco they celebrated. Cars with cheering supporters, waving the Red Moroccan flag, drove loudly honking through Marrakech, Rabat and other major cities. That much is certain, Morocco counts as a football nation again.

The Moroccan national team consists of some gifted footballers who were born in the Netherlands and Belgium. Hakim Ziyech, Sofyan Amrabat, Noussair Mazraoui and Zakaria Aboukhal also play at established international clubs. Their parents and relatives gleam with pride.

Nevertheless, after the won match, riots break out in the major cities of Belgium and the Netherlands. No one understands why. Brussels police said they were prepared for riots. A spokesman said: “Brussels is always flammable and great preparations were made. We tried to limit the riots to a zone of about 200 meters. The water cannons were deployed to prevent the riots from moving to other parts of the city.’

Riots after every match

The police were not prepared. Are these types of incidents preventable? My first answer is clear: no.

It’s also not the first time something like this has happened. Five years ago, major riots broke out in the city center of Brussels after Morocco qualified for the World Cup at the expense of Ivory Coast. In the riots, 22 officers were injured and shops were looted. Several rioters have been sentenced to labour sentences.

I also remember a match in Tilburg between a Moroccan youth team and Jong Oranje. The Moroccans won the match. Hundreds of Moroccan fans stormed the lawn and threw chairs and corner flags. In response, the KNVB decided not to organize any more friendly matches against Moroccan teams.

The match can therefore be regarded as a match with an increased risk. And of course, immediately after the match riots broke out, not only in Brussels, but also in Antwerp, Liège and in some Dutch cities. In the Belgian capital, hundreds of young people wreaked havoc. Rioters threw fireworks, sticks and beams at the massively outraged police. Others broke off street furniture. The reportage car of a camera crew of the Flemish broadcaster also had to pay off.

They were ‘Just celebrating’

On the news, the mayor of Brussels said that the riots have nothing to do with football. It’s about ‘crapule ‘ that uses football as an excuse to kick keet. A dozen rioters are arrested; their identities are not disclosed.

Riots also broke out in Rotterdam and Amsterdam this week. Around 500 supporters gathered on Amsterdam’s Mercatorplein after the match. What started as a party turned into riots, fireworks and fires. This is after one game won, says a Moroccan boy. “Imagine if Morocco makes it to the next round.’ It is clear to everyone that they are young people from the Moroccan community. ‘We just want to celebrate, but the police won’t let us do that, so it’s exciting, ” a young supporter told a Belgian reporter.

At a press conference last Wednesday, the National Coach of Morocco, Walid Regragui, also condemned the behavior of the rioters. ‘You have to respect the country where you were born. You can be happy and celebrate, but you have to show respect for everyone, ” said Regragui, according to the ANP news agency.
“Not representative’

According to Flemish sociologist Ruud Wouters, the rioters are not representative of the Moroccan community in Brussels and Antwerp. ‘They have abused the Sporting, ” he says. “What was the message of those people?’ It doesn’t seem to be there. Wouters sees this picture at many large manifestations. ‘It is a pattern that occurs at collective events such as New Year’s, a demonstration or the World Cup football like now. Things that affect the whole society.’

A similar kind of statement can be heard from the mouth of the Dutch criminologist Jan Dirk de Jong. To a journalist of De Telegraaf he explains that you see the same behavior with the hard core supporters of Feyenoord, especially after a lost match. There is nothing Moroccan about the riots, De Jong said.
“All those fucking Moroccans.”

Apparently it is. Well-integrated Moroccans in Belgium and the Netherlands are deeply ashamed of the misbehavior of their young compatriots. In the NRC (november 28), A believing Moroccan says: ‘How can you be happy that you put steps in the car and overturn cars? You are ruining the future of our children, our parents and ourselves. We are not hooligans, we are Muslims. We must set a good example. It must have been enough. Where’s your heart? Why does it have to get this far? ( … ) Why do we always have to ruin it? You are giving Wilders and his Belgian colleague even more work.’

In turn, native Dutch and Belgians react in the manner of: ‘always those rotten Moroccans who make noise. Now even after a won match.’

The left-wing media is not well aware of this either. Sometimes political correctness gets in the way. vanaf.In in a two-column column, the Volkskrant pays attention to the football riots on the inside page, while for days there was attention and indignation for the Sinterklaas riots in the municipality of Staphorst.

Football evokes emotions, that much is certain. This also applies to British, Dutch, Ghanaian and Brazilian supporters. But it does not lead to riots or misconduct, especially in the event of a victory. Yet this behavior is not typically Moroccan. It is typical for the behavior of Dutch and Belgian moccasins, whose parents are originally from northern Morocco.

Sixty percent of the first generation of Moroccans come from the northern part of Morocco. They’re Riffins. The Riffian Berbers are known as a difficult people. They are colorful, but also with everyone at war. And no one can be trusted. The Riffijn is at most loyal to its own family circle, but that is already beginning to show cracks.

The Moroccan authorities, the King at the forefront, use every opportunity to encourage the feeling of pride and honour among the Moroccans living in Europe. “Once a Moroccan, always a citizen.” that’s their message. That is why the Dutch and Belgian-born footballers choose the national team. Even though they are naturalized as Belgian or Dutch, they still feel Moroccan in their hearts. They also have a dual passport.

The behavior of the Moroccan rioters in the Netherlands or Belgium is the result of the daily clashes of two, perhaps three different cultural and thought patterns: the feminine Dutch or Belgian Christian culture, the macho Riffin – Islamic culture and the contemporary street culture.

The worlds in which Moroccan young people grow up in the Netherlands and Belgium – the boring and authoritarian life at home, the free life at school and the exciting life on the street – are not in harmony with each other. On the contrary, they constantly collide. This leads to insecurity, violence and crime. This is especially true for Riffian boys who grew up in poor socio-economic conditions, who have little education and are less strong in their shoes. I have called this phenomenon ‘the internalized cultural conflict’.

Even small incidents can turn into big conflicts. This is usually manifested in stressful conditions, in case of group behavior and in confrontations with a foreign authority. This can be the Dutch teacher at school, the border judge on a Dutch or Belgian football field or the police on the street.

The football riots in Brussels, Antwerp, Rotterdam and Amsterdam are not a foreign product, but the result of the many daily clashes of Moroccan young people in their immediate vicinity. Even with a victory of the Moroccan national football team, it can suddenly erupt.