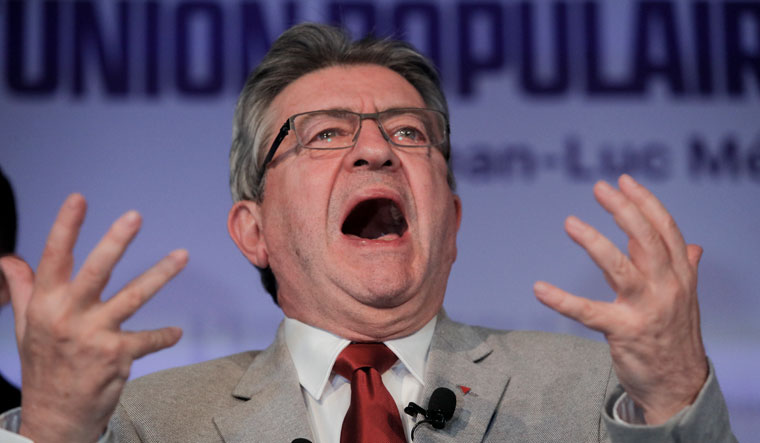 What lessons do the French-speaking party leaders in our country draw from the results of the first round of voting in the French presidential elections? Very diverse, as it turns out. ‘This is the eternal tragedy of the left.’

If it rains in Paris, it drips in Brussels, the saying goes. The compass of quite a few French-speaking compatriots is oriented to the south, to large neighbouring France. Social, cultural, but also political. This means that the French-speaking politicians in our country are regularly inspired and guided by what is happening in France. More than we realize north of the language line.

The question of what lessons they draw from the first round of last weekend’s presidential elections, with current president Emmanuel Macron (27.8 percent of the vote) and the far-right Marine Le Pen (23.1 percent) advancing to the second and decisive round of voting, therefore says something about the political state of affairs in France and Belgium.

For PS President Paul Magnette it is clear: the victories of Macron and Le Pen show “the eternal tragedy of the left”. That the progressive candidates, led by the far-left Jean-Luc Mélenchon (22 percent) with the Greens Yannick Jadot (4.6 percent) and Anne Hidalgo of PS (1.8 percent) in his wake did not survive the first round of voting, he attributes to strategic naivety. “Many socialist and Green voters voted for Mélenchon because he came out of the polls as the man of the ‘vote utile’. But that did not lead to anything,” says Magnette.

In an electoral system with two rounds of voting, the Left must be united in the first round, the socialist argues. Otherwise, one organizes one’s own defeat. “If all the left-wing formations had united behind one candidate, the second round would have started for Macron.”

Magnette’s reaction also partly refers to the shifting political power relations in our country. The most recent polls show that the extreme left is on a steady growth spurt in Belgium. In Flanders, but especially in Brussels and Wallonia. This is where the party gradually comes to threaten the long-standing position of power of PS. In the capital, Ecolo comes out as the largest party in the polls. PS Chairman Magnette sees bad omens in the French result: if the left is divided, the right ultimately triumphs.

Magnette’s analysis is not new: it is a classic way of dismissing a vote for PVDA-PTB as a so-called ‘Lost vote’. Or more: as a voice that only benefits ideological opposition. Earlier, N-VA chairman Bart De Wever already ruled on the Flemish Interest that a vote for that party is a vote for the French-speaking left.

It will come as no surprise that Raoul Hedebouw, the Liege leader of the PVDA-PTB, has a different view of the French results. “I especially note that Mélenchon has thrown himself into a rebellious campaign. He is someone who has appealed to the people’s neighborhoods – he wins in Roubaix – and the young people. In that age category, he scored the best of all candidates.”

Hedebouw sees this as confirmation of his own course. “There is a Great Barrier among the people and as a left-wing politician you can only capture that with strong ideas. You should not only think about what is supposedly practically feasible. And you certainly should not get carried away in a left-wing neoliberalism like Hidalgo’s, which is suffering a devastating defeat.”

For Hedebouw, there is no question of strategic blunder within the left. Mélenchon himself was against one leftist candidate in the first round of voting and, according to Hedebouw, with right and reason. “It is not possible to concede in terms of content to your program, including lowering the retirement age to sixty years, in order to take the Socialists and greens on board. You get fewer votes than more. Magnette’s sum is wrong.”

On the right, MR President Georges-Louis Bouchez believes that the results of the first round of voting mainly show that voters are looking for politicians who promote a social project right in front of the turnip.

Bouchez: “everyone who skipped has lost heavily, including the PS. More and more, the traditional parties are no longer able to understand what the middle class thinks. To give them a credible story. You see that decline in many countries, not just in France. Look at our own country: we are launching a campaign that encourages citizens to use less gas, but we are building two new gas power plants to compensate for the nuclear phase-out. They don’t understand.”

As for the sad score (4.8 percent) of Valérie Pécresse, the Liberal candidate of Les Républicains, the party of former president Nicolas Sarkozy, among others: Bouchez is to blame for her weak profile. The other liberal leaders were better able to do so, according to him. “In any case, Macron as a “liberal” respect, that’s for sure. He will work the second round of voting, but I do hope that it does.”

“As socialists, we must turn a blind eye and go for Macron, to avoid the absolute drama of a far-right presidency in France.”