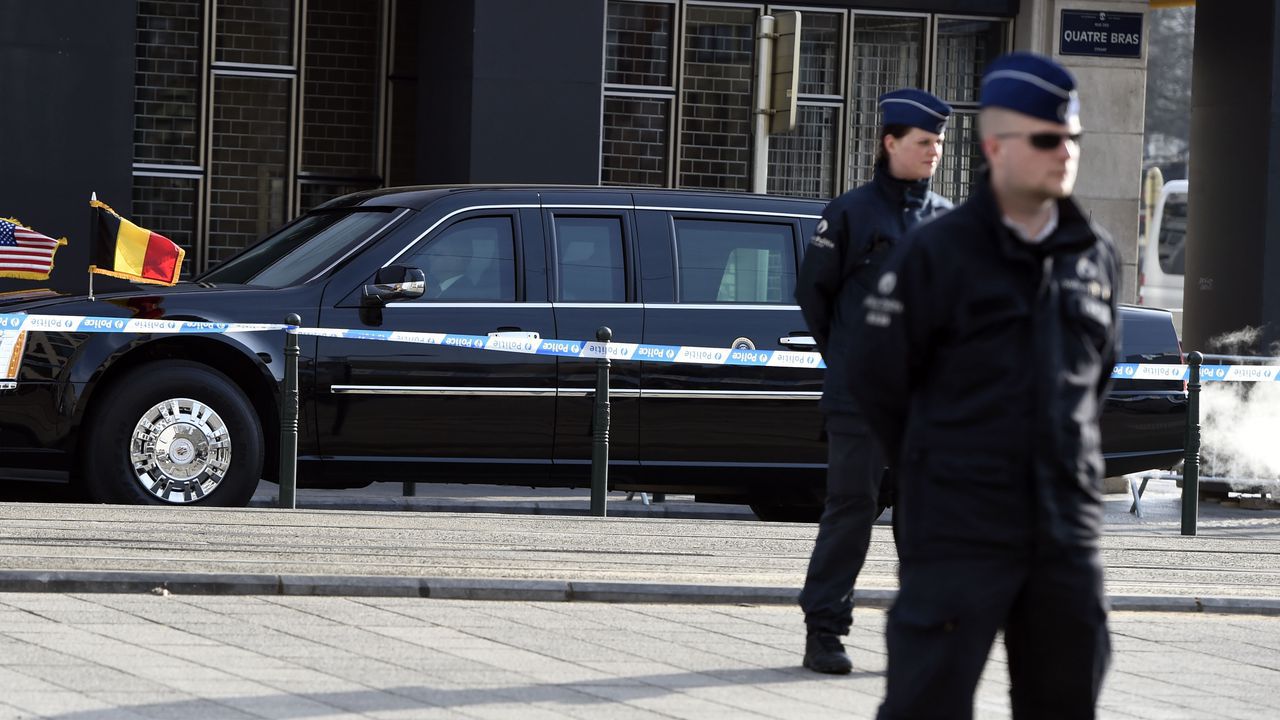 The American president and the
European heads of state and government all in the country at the same time. That
could mean a lot of disruption in and around Brussels. Where and when can you
expect problems in coming days?

Starting Wednesday night, there are
three security zones in Brussels, where you cannot drive by car, where buses
and trams are diverted and where you cannot even park your car, bicycle or
scooter.

The zone around the American
embassy: Regentlaan, part of the inner ring road (above ground), and the Hertogstraat
along the Warande Park will be closed to all traffic from Wednesday afternoon
to Friday morning.

The zone around NATO: on the
Leopold III-laan (from the intersection with the Jules Bordetlaan to the NATO Tunnel
on the A201) all traffic is prohibited on Thursday, so you cannot drive or
cycle via the A201 between Brussels and Zaventem.

The zone around the European District:
the streets around Schuman roundabout and the Reyers-Centrum Tunnel on the E40
from Leuven are closed from Thursday morning till Friday afternoon.

Retailers and residents in these
zones must observe strict security measures. You can’t have any online orders delivered;
you can’t put refuse bags out.  Patio
furniture needs to go inside and the windows of houses and office buildings
must be closed. Residents can still go about after being checked by the police.

Some motorways and avenues in
Brussels will be temporarily closed.

During the movements of the
president’s party, many roads will be closed temporarily.

For security reasons times can
change at the last minute. The police never tell us exactly which routes the parties
will follow, but we have a reasonably good idea of the routes. 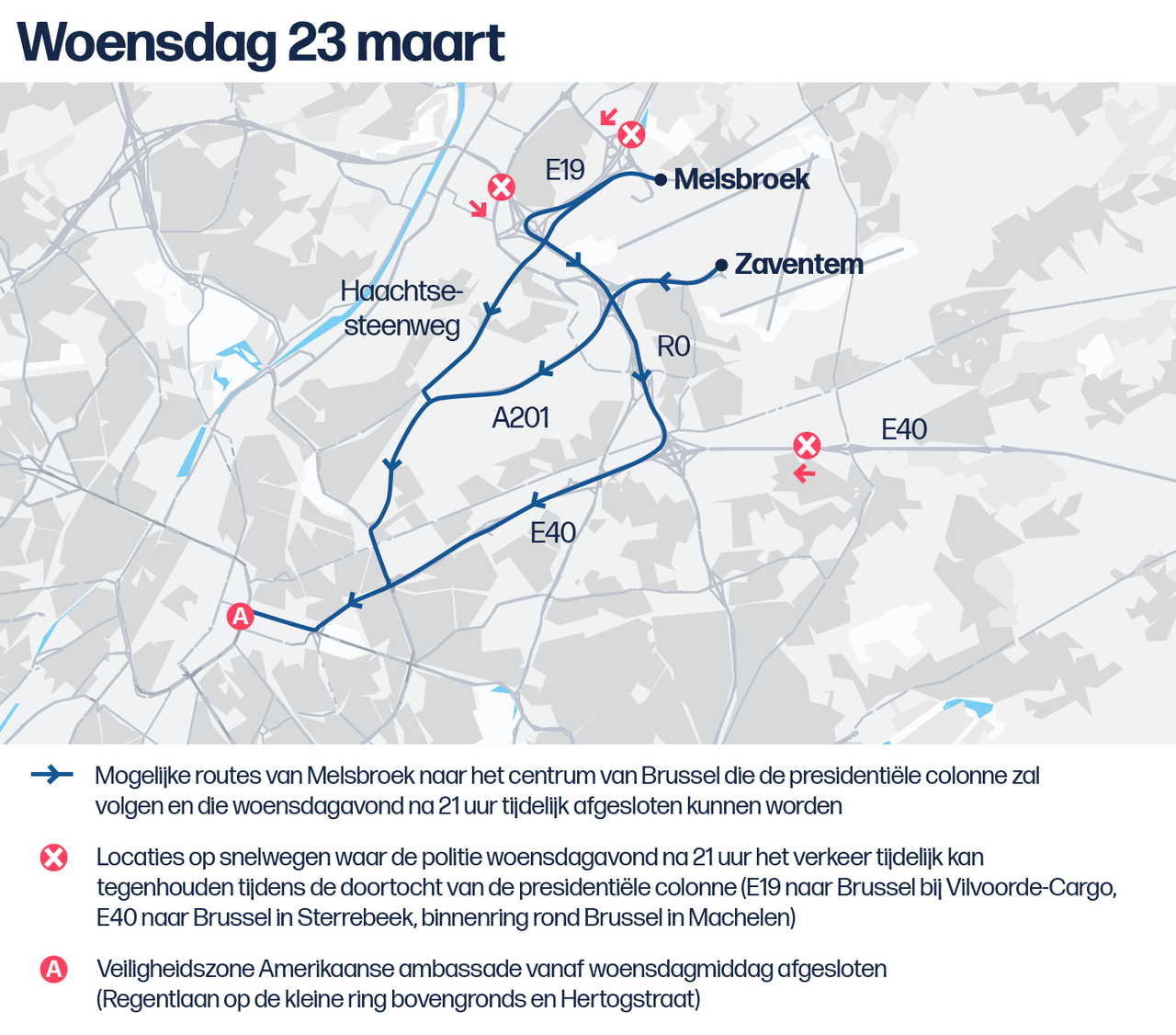 Biden lands at the military airport in Melsbroek around 9 PM on Wednesday.  After being welcomed by the prime minister, he is driven to the American embassy.

During his journey, roads from Melsbroek to Brussels will be closed for a while: possibly the ring around Brussels in Machelen, the E40 from Leuven in Sterrebeek, the E19 from Antwerp at Vilvoorde-Cargo, the A201 and the Haachtsesteenweg.

The security zone around the American embassy will be closed from Wednesday afternoon. Parking may be restricted on the Waterloolaan because some of Biden’s staff are spending the night at "The Hotel". The security zone around NATO is
closed to traffic all day Thursday. You cannot drive from the ring to Brussels
via the A201 or vice versa.

After the morning rush hour, the
zone around Schuman may be closed (including part of the Wetstraat and the Froissartstraat),
and from Leuven you can no longer drive to the centre via the E40 and the
Reyers-Centrum Tunnel.

Because the NATO summit starts at
10AM, avenues and streets between the centre and Evere will be closed
immediately after the morning rush hour (possibly the Belliardstraat, the Leopold
III-laan and the E40, but also tunnels on the inner ring road).

In the afternoon, Biden will travel
from Evere to the European District, where he will attend the European summit
for two hours.  So, roads may again be
closed.

After the European summit, another
column of VIP traffic will make its way from the European District to the inner
ring road, possibly in the middle of the evening rush hour. 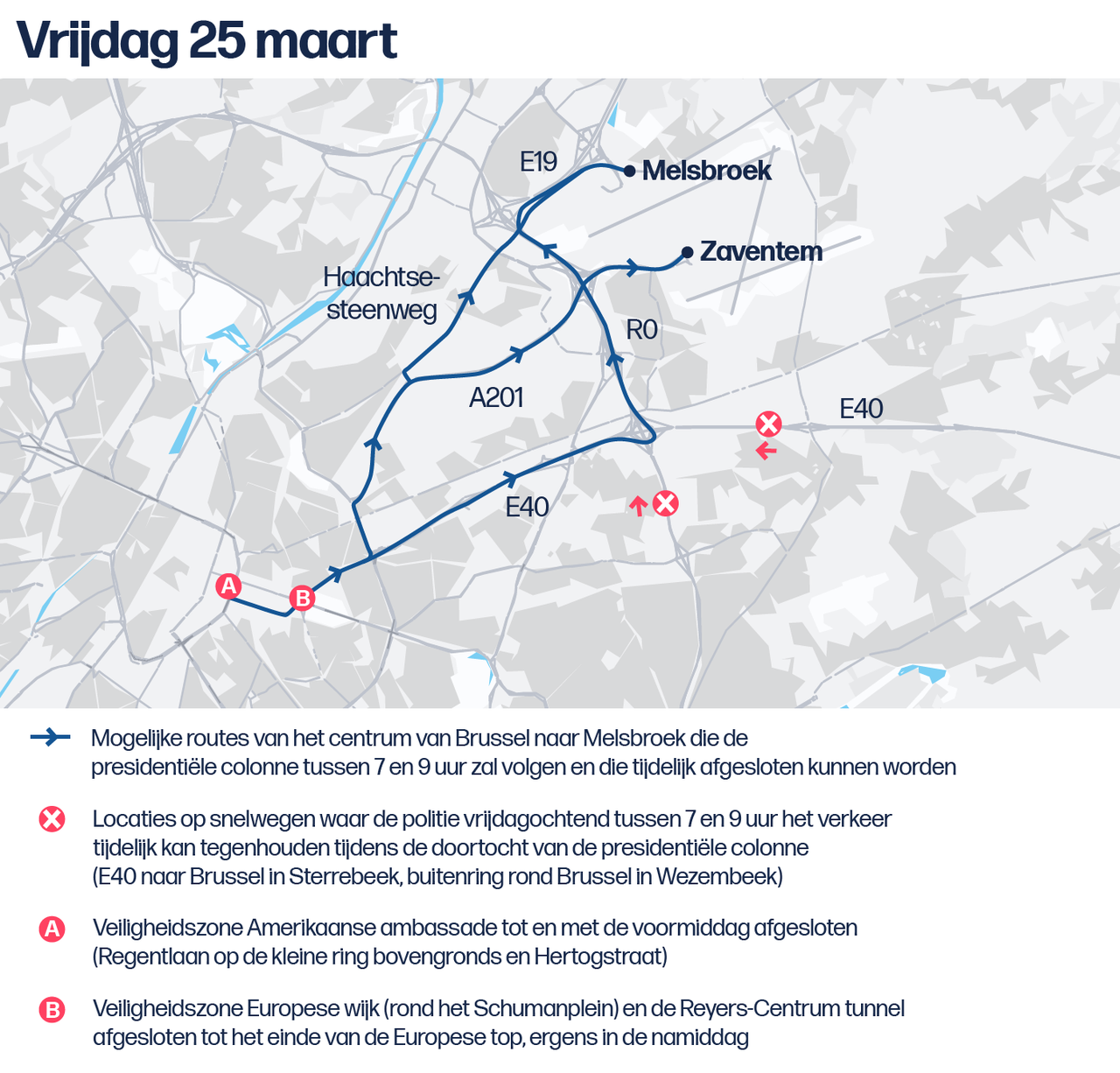 On Friday Biden needs to be at
Melsbroek around 9AM for a flight to Warsaw.
The party will probably travel from the US embassy to Melsbroek between
7AM and 9AM via Belliardstraat, the E40 or the A201, but then in the out-of-town
direction.

During this journey, the police may
stop traffic on the outer ring around Brussels at Wezembeek and on the E40 from
Leuven in Sterrebeek.

After the morning rush hour, only the
European District may expect disruption. The Reyers-Centrum Tunnel remains
closed until the end of the summit in the afternoon.